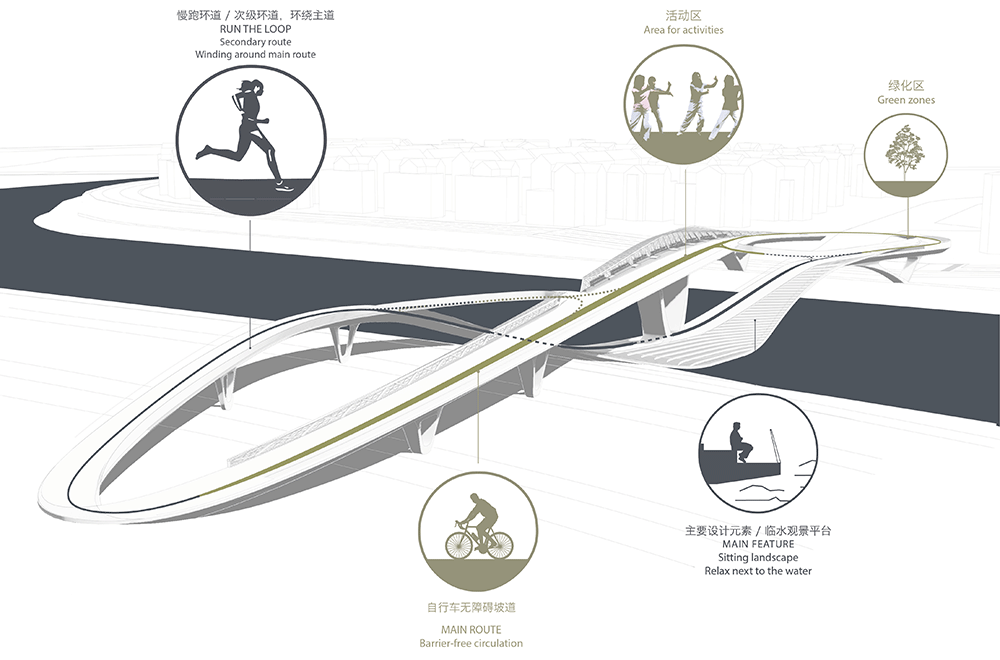 The bridge is designed to offer an attractive car-free pathway over the Fu Hé river which is meandering in southern direction through Chengdu, the capital city of the province of Sichuan with approx. 14 million inhabitants. Fed by several tributaries the river grows on a width of approx. 100m in the southern district Wuhou where the INFINITE LOOP is positioned. In prominent location close to the Century City New International Conference & Exhibition Center (CCNICEC) with its nearby park and mixed-use developments the bridge forms a main connection to the ample residential areas. Being designed as three dimensional landscape element with high qualities to rest the bridge functions as extension of the cityscape and recreation area. By offering a comfortable path for green means of transport like bicycles or E-bikes and for walking by foot - strong incentives for a sustainable mobility are set, supporting a turnaround in transportation. 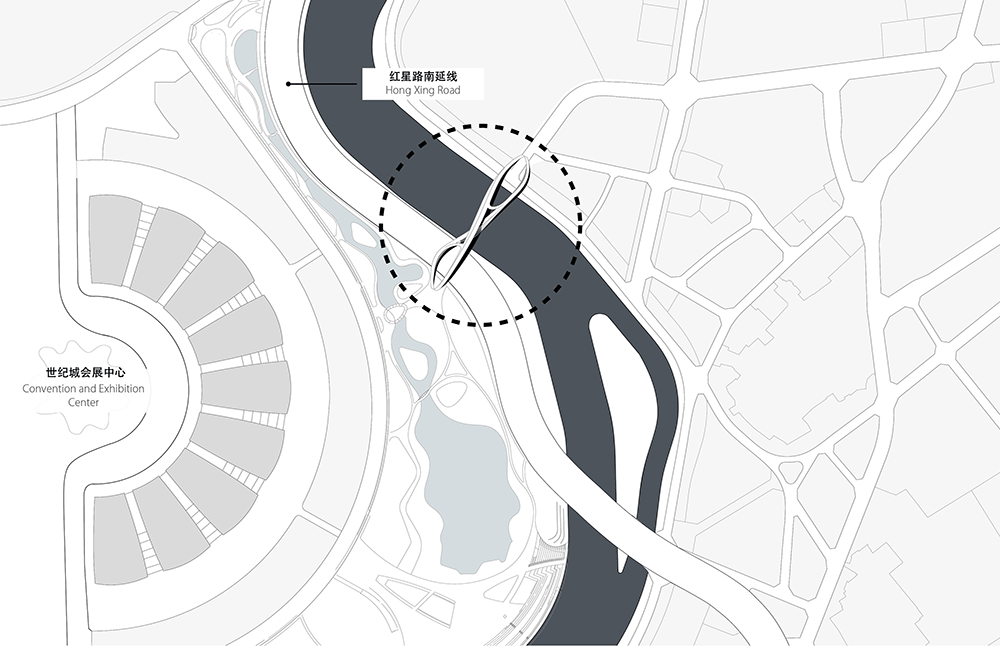 Whereas the surrounding bridges for car traffic are cable bridges with vertical elements the INFINITY LOOP works with a horizontal gesture creating a diverse undulating landscape with valleys and peaks. Combined by a direct route with a total length of approx. 252m two main routes for passing the bridge are provided. Together they create an eight shaped figure as symbol for infinity. The tangible continuously changing geometry is inspired by the Möbius strip, a continuous surface with only one side and only one boundary creating an endless loop. By developing this mathematically describable structure further the main conceptual, functional and structural principals of the bridge were derived. 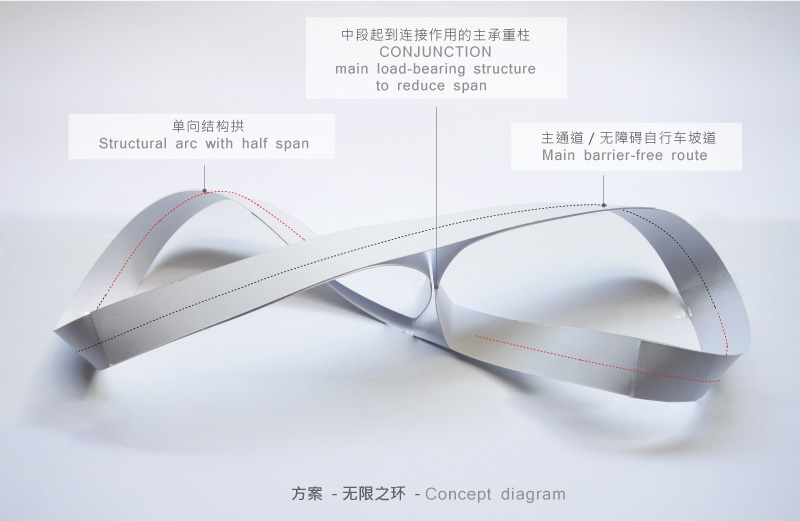 The upper direct route is constructed as 252m long shallow arc being supported in reasonable distances to reduce span and allow for an overall slim construction. The main load-bearing structure is a v-shaped element evolving out of the arc above running into the route below.

It is here, at the projected intersection of both routes where the main loads are bundled. The undulating route is composed out of two arcs providing minimal spans and simultaneously ensuring an ideal distribution of forces. Quite naturally the seating landscape is spanned in between these arcs. Thus an overall synchronized structure is developed providing for a maximum slim and material efficient construction. 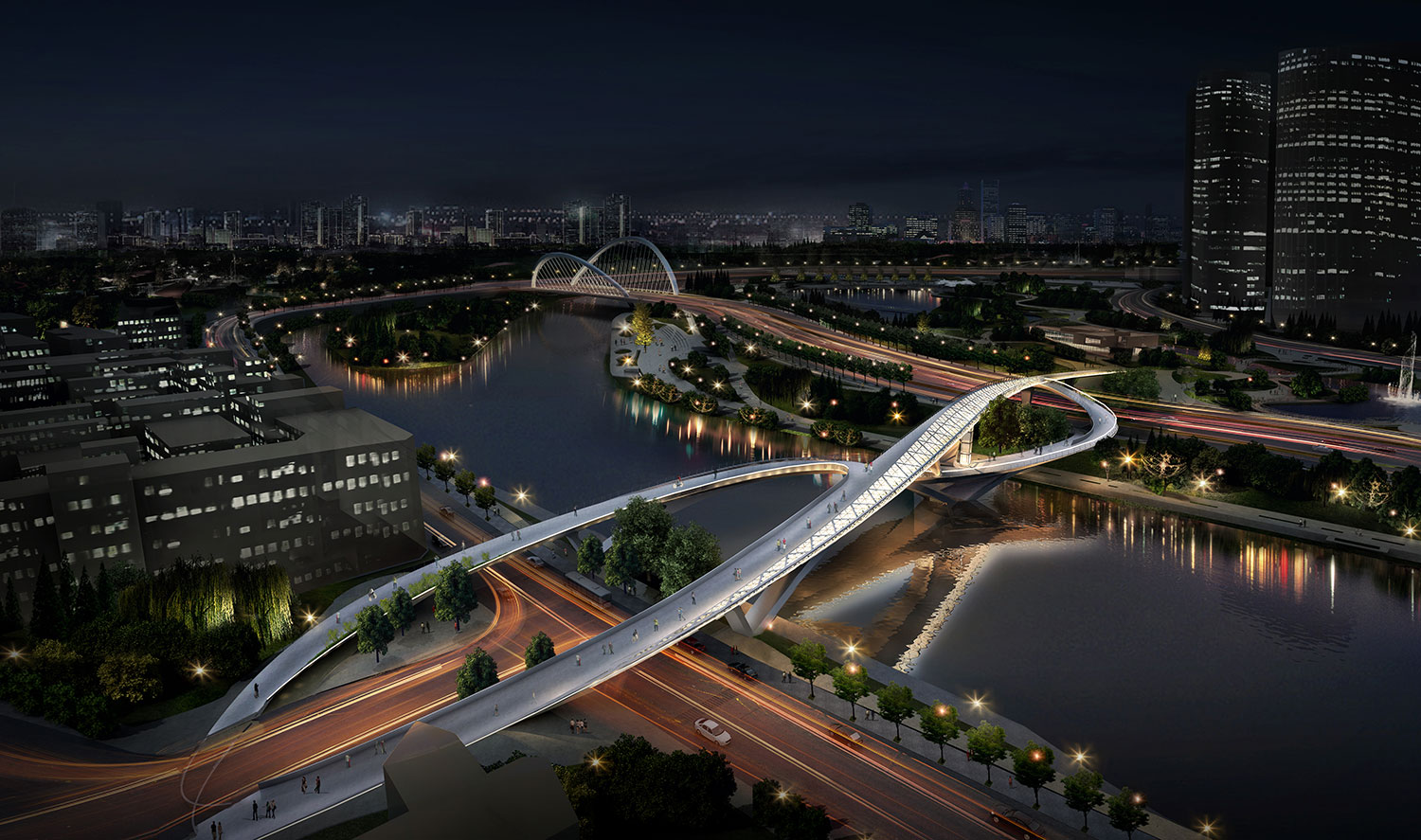 The INFINITE LOOP was the winning scheme out of a competition decided in October 2015. After a revision phase until mid of November 2015 the plans were delivered for the construction phase.

The INFINTE LOOP was realized in a typical “design and build” process where the design was created by WÜNSCHMANN KAUFER ARCHITECTS a collaboration of TOM WÜNSCHMANN architecture & design and ac.ka – architektur together with Buschmeyer+Cai and the Sichuan Architectural Design and Research Institute.